The One Sentence Sales Email: How did it do?

Recently I took a look at why I liked the idea of the one sentence sales email. There was only one thing left to do: give it a try!

Looking back, this should have been an open-ended question. Hand up on that one.

As with anything in the art of sales, results were mixed.

Some people were really cool: 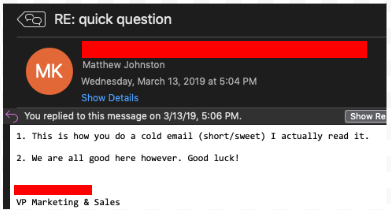 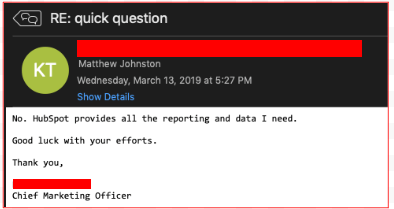 While other people weren’t about it: 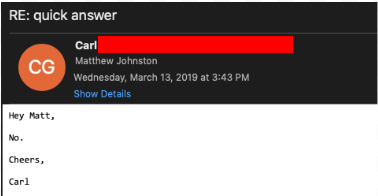 Like anything else in sales, there is no silver bullet. I’ll be sure to report back if I ever find one though!

However, response rates that were exactly the same as the industry average is a net win as it hardly takes any time to drum up. I also consider it a positive as the unsubscribe rate is only a quarter of the typical rate, showing that it doesn’t irritate people the way that long, droning sales emails do.

All in all, this made for a fun afternoon. Have any other ideas for sales/marketing experiments? Drop me a line at Mattj@explorics.com